How to Digitize Small Lettering

Follow these tips for mastering this important part of any embroidered logo design.

This cigar label is an example of small lettering that is a necessity in the corporate designs that many embroiderers have to digitize and reproduce.

In embroidery, no detail is more important than lettering. Your designs are labels for your customers and they must be able to read those labels — even the small print. However, what is easily read in print is not always easily read in thread.

However, thread and needle sizes are not the only solutions for the perfect letter. The smallest letters are created with running stitches. When creating letters with a running stitch, you shouldn’t go over any part of the letter more than twice.

You will need to extend the corners of the letters for clarity. You also must open up your letters, and you will have to drop the cross bars and your “O”s will drop below the line and be pulled up. The fact that the thread pulls is your ally.

You want no underlay, and do not want to walk through the letters with your running stitch as you would in conventional letters. Lastly, you will need to proof the lettering and adjust where needed.

SMALL-LETTERING TIPS
To embroider small letters in a running stitch, start at the beginning of the word and go to the end, covering only the lower half of the letter. Place the stitches so they conform to the curves of the line and go to the junction of the letters going straight across any open area at the closest point.

Do not go up to the top of the letter; only concentrate on the lower part. Follow the letters to the end of the word.

In Image 1 in the attached image gallery, you can see the stitches that have been entered. This will take shape when going back through the word to add the top part of the letters.

Next, start at the end of the lettering where you left off. This time, put the second layer of stitches on the bottom and go to the top, then come back down over the stitches you just placed. You may want to turn your template off and on so that you can be sure your needle penetrations are placed between the original ones.

Make sure your stitch covers the junction of the lower part of the letter. Remember, the final application of the stitches is what you will see. Continue to trace the lower part, and proceed to the top of the next letter until you reach the end, which actually is the beginning of the word.

An alternative solution is to complete each letter so that you end on the last letter. Image 2 shows this progression. Either way, the proof is in the sewout. Be prepared to edit to reach perfection.

In using the preprogrammed fonts, or keyboard fonts, one of the simplest solutions is to shorten the height of the letter — which essentially widens the columns — and lighten the density at the same time. As noted earlier, the smaller the letter, the lighter the density and the wider the column.

Most small letters are the width of a needle. Therefore, two needle penetrations — if not spread apart — will end up on top of each other. If you took a needle and put penetrations on each side of the larger letter, you would see that there was fabric between each penetration. However, if you took that same needle penetration and used it on either side of a smaller letter, you would notice the fabric between them has decreased. There is less fabric to hold that stitch in place. The loop between the holes that the needle leaves also has decreased, giving you a thinner column. In some cases, there is no fabric at all between the two needle penetrations, thus no material to hold the stitch in place.

A smaller needle may solve part of the problem, but not all of it. As you can see in Image 3, when using a needle in the conventional letter size, there is room between the two needle penetrations. In the second part of Image 3, the same size needle penetration is now on top of itself for the smaller column stitch in the smaller letter.

Image 4 shows a conventional font that has been scaled down to a .20-inch-high letter and a font of the same size that was digitized for small letters. The differences are immediately apparent.

You can extend the length of the words in the conventional font to match the length of the words in the small-letter font (see Image 5). When this happens, some of the differences are minimized, but the A is not as opened, the corners are not as clear, and the O sits on the line and actually will rise when you stitch it. And look at the differences in the K.

In Image 6, where the lettering’s density has been lightened to see what is underneath, it is remarkable that the running stitches form a center-line underlay in the conventional font, while the small-letter font has none. Looking at the “T” and “H,” you will see these extra stitches in the top group of letters, while it is wide open in the lower group. In fact, in the lower group, you are not walking from one area of the letter to another.

To program the smaller letters correctly, you must rethink your sequence and start each letter on the right-hand side rather than the left in an effort to minimize the use of the running stitch. That running stitch traveling through the letter will add unneeded density and distort your tiny letters.

When you have finished, proof the lettering by running it on the embroidery machine. Look for wobbly posts, which is a sign of too much density. Rework any letter that you have walked through using your running stitch. If you have wobbly posts, lighten the density. If letters float, move them into place and if they dip too far below the line, move them up. If a letter is closing, open it and then run it again.

Professional digitizers who do nothing but small letters will run a line of lettering several times, tweaking it each time until it is perfect. Don’t be afraid to do proofs. The more experience you have with this part of embroidery, the better you will become. Understanding the physical rules that govern the machine will allow you to reach perfection faster and more easily.

Lee Caroselli-Barnes, owner of Balboa Threadworks Embroidery Design, is known for her innovation and excellence in embroidery digitizing. She has 30 years experience in the embroidery industry. For more information or to comment on this article, email Lee at balboainfo@aol.com. Hear Lee speak on digitizing topics at the 2019-2020 Imprinted Sportswear Shows (ISS). Reduced conference pricing is available if you pre-register: issshows.com.

Small-Letter Digitizing: A Review
• The smaller the needle, the smaller the letter can be.
• The thinner the thread, the smaller the letter can be.
• You can create a smaller letter with a simple running stitch than with a column stitch.
• A column stitch is still a column stitch, even when you use it in a letter.
• If you are creating small letters with your column or satin stitch, you are bound by the properties of that stitch. The wider the column, the more it will pull in. The more it pulls in, the more it will fill in.
• The wider the column, the lighter the density.
• You will need to extend the corners of the letters for clarity, open them up and drop the cross bars. The “O”s will drop below the line and be pulled up, and you will have to rethink the sequence in order to avoid walking through the letter.
• Proof the lettering and adjust.

Learn to Create Your Own Designs 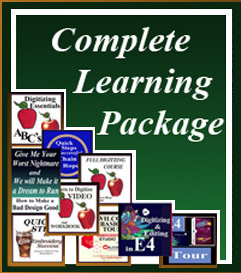 Whether you want to Edit, or Digitize,
We are there with you every step of the way.  View a Class, ask questions, get answers in real-time, progress to the next class and Create beautiful Designs that are a pleasure to run!   Try out our Digitizing Classes! 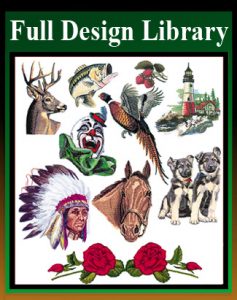 More than 6000 beautifully digitized Designs
at a fraction of the price, with instant online access
Choose a Design, Choose the size, Choose the Format and order the Thread.  Have instant access to the Design Download, and receive a backup Design DVD    Consider our Library